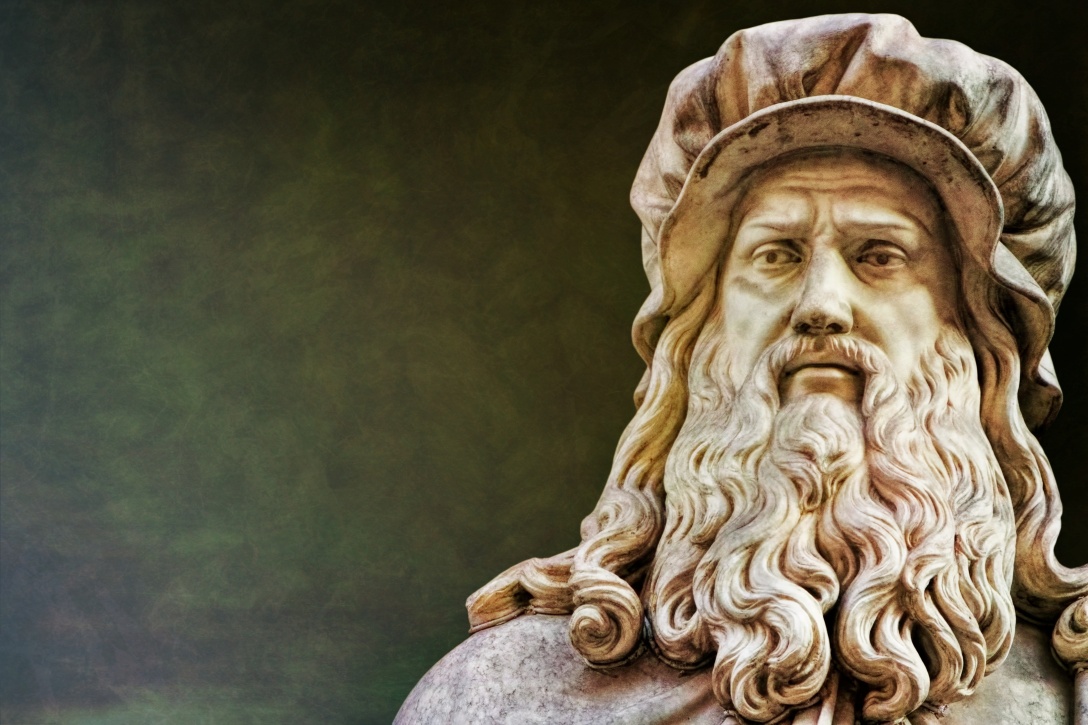 Upon the unveiling of the new Leonardo Da Vinci room, Room 35, in 2018, the director of the Uffizi, Eike Schmidt, stated,

The new arrangement has been designed not only to permit a slow, meditated visit, whereby visitors can compare the art and understand the stylistic evolution of Leonardo in his youth, but it is also correct in terms of art history, placing the artist’s works immediately after the rooms dedicated to the Florentine Quattrocento…It is part of a set of changes implemented to adjust the Uffizi to the needs of understanding by visitors as well as adhering to the museum’s educational principles.

The walls were painted grey to both enhance the mediative atmosphere as well as to mimic the church environment for which the paintings were originally meant. On the left is the Baptism of Christ (c. 1480), which was commissioned for San Salvi Church sometime around 1475-78. Leonardo worked on this painting during his apprenticeship with Florentine artist Andrea del Verrocchio, a Renaissance legend in his own right, although more gifted as a sculptor than a painter. (Verrocchio designed and installed the golden palla (“ball”) on lantern of il Duomo). In fact, due to his background as sculptor and engineer, Verrocchio was a master at conveying movement in his art. Leonardo would adopt his maestro’s skill to transform his own art from intrinsically static into a narrative.

Art historians believe Leonardo painted the angel on the far left of the scene, the body of Christ, and the background. The twisting figure of the angel is typical of Leonardo (one of his many methods to demonstrate movement in his works), as are the angel’s beautiful curls.

In the work, John the Baptist, Jesus’ cousin and harbinger, performs the first baptism of the Christian faith. He is shown pouring water from the River Jordan on Jesus’ head, as recounted in the Gospels:

Thus, the Holy Trinity is represented here: God the Father, represented by the arms, Jesus the Son, in the flesh and therefore no representation necessary, and the Holy Spirit, represented, as it so often is, by the dove. The scroll unfurling from John’s hand states, “ECCE AGNUS DEI,” the shortened version of “ECCE AGNUS DEI QUI TOLLIT PECCATA MUNDI” (“Behold the Lamb of God who takes away the sin of the world.” John 1: 29).

The centerpiece of this room is Leonardo’s Annunciation (c. 1472 or c. 1475-78), which is believed to be Leonardo’s first work that he completed single-handedly (although he is believed to still have been in Verrocchio’s employ). The painting ​was recently restored in 2000, revealing the work’s original luminosity, clarity of detail, and sharp perspective. According to Christian belief, the Annunciation is the moment when the Archangel Gabriel appears before the Virgin Mary to announce that she is to bear God’s only son. Leonardo departs from previous representations of this moment, which typically depicted the exchange in an enclosed space, such as a loggia, by placing the Virgin and Gabriel outside.

Verrocchio’s continuing influence on Leonardo is evident in the shape of the lectern, which is reminiscent of Verrocchio’s design for the tomb of Pietro de Medici, located in the Church of San Lorenzo. Moreover, although the Annunciation is no doubt a masterpiece (and way beyond the bounds of anything I could even dream of producing, as devastatingly evident in every wine and paint night I’ve ever participated in), Leonardo’s youth is discernible due to several anomalies. First, the Virgin’s right arm (the arm reaching towards the lectern) is disproportionately long. Secondly (and hypercritically, but important to point out to demonstrate Leonardo’s exponential growth in his skilled use of light and shadow), Gabriel’s shadow is too dark for dawn, which the restoration revealed was the time of day Leonardo chose to set his scene. Leonardo likely chose dawn to symbolize the Annunciation, i.e. the dawning of Christianity.

The dawn light casts a pale yellow glow on the garden wall and top of lectern, and shadows are seen where the sun light would be blocked. Moreover, the lectern’s side, however, has a blueish tint. This tint signals Leonardo’s bourgeoning interest in refracted light; indeed, Leonardo discerned that white marble sitting outside is lit by refracted light of the sky, not the light of the sun. Leonardo’s detailed observations and scientific acumen is also evident in Gabriel’s wings, which fold realistically, as though they were actual bird wings. Here, Leonardo once again departs from the conventional depiction of the Annunciation, which dictated that Gabriel’s wings should be multicolored.

Leonardo purposefully used light and shadows to create plasticity (i.e. the effect of three dimensional volume in a two dimensional space), a technique that would be later be known as chiaroscuro (derived from the Italian word for light, “chiaro,” and dark, “scuro”). To employ chiaroscuro in his works, Leonardo created a tonal range for each pigment that ran from white to black and then coordinated each tonal range with another to ensure that all hues were represented in a single overall light to dark range, creating the effect of shadows. These colors could react uniformly to where the light hit a particular object. For instance, the Virgin’s sash looks further back in the painting than the blue robes despite blue being the darker of the two hues. The previous system, known as the absolute color system, which had been in use since the middle ages, involved adding white to a pigment to make the color lighter. Problematically, adding white to pigment dilutes the pigment and therefore does not accurately capture the effects of light on color. Because the darkest tones would be the most saturated with color (since they had less white mixed in), they would be the most intense. But in reality, intensity of color corresponds to the amount of illumination and light. Therefore, Leonardo rejected this system and invented chiaroscuro.

Leonardo also used a technique known as sfumato, a method involving the blurring of contours and edges. In pursuit of his scientific studies, Leonardo realized that the eye does not register sharp edges; instead, the human eye blurs edges of objects. Therefore, when drawing, Leonardo did not outline his figures and then fill in the details. Instead, he modeled his figures from space; building their forms from inside out. In his notebooks, Leonardo wrote, “The line forming the boundary of a surface is of invisible thickness. Therefore, O painter, do not surround your bodies with lines.” Leonardo da Vinci, quoted in Isaacson, Walter. Leonardo Da Vinci (Simon & Schuster 2017). Leonardo’s use of sfumato is most clearly evident when you compare the painting’s foreground, which features detailed flowers, with its background, which fades into haziness. It is therefore counterintuitive that it is the background that is the focus of this work, more specifically, the mountain in the background. All perspective lines lead to the mountain, drawing the viewer’s eye towards it.

Moreover, it is framed by the trees. One of St. Bernard of Clairvaux’s sermon on the Annunciation speaks of the “Mountain of Mountains” and the sky giving forth dew, which is received by the Earth (representing Mary’s womb). From this fertilization (i.e. the Annunciation), comes forth Christ, who is spoken of as the Mountain on the Sea.

The final work by Leonardo in this room is the Adoration of the Magi (c. 1481), which was commissioned by the Augustinian monks of San Donato a Scopeto in 1481, but was never finished. It remains – even in its unfinished form – as one of the greatest works of the Renaissance.

Art historian Kenneth Clark called Adoration, “The most revolutionary and anti-classical picture of the fifteenth century.” Kenneth Clark, Leonardo da Vinci (1939). Indeed, Adorations typically contain an ordered, stately procession, with a focus on the Holy Family, who typically wait in a lower corner of the painting. Leonardo throws that convention out completely, giving us a frenzied swirl of activity that surrounds the Christ child, pictured in the center of the work.

These frenzied and emotional figures prefigure mannerism, an artistic style that would become the mainstream in the late Renaissance (about forty to fifty years after this work was commissioned). Typical of Leonardo, the Adoration focuses on the onlookers’ reactions to the Incarnation, part of the reason for the chaos. Leonardo’s notebooks are full of doodles exploring human facial expressions. His notes make clear that his figures’ emotions are paramount and take expression in their movements: “In painting, the actions of the figures are, in all cases, expressive of the purpose of their minds.” Leonardo da Vinci, quoted in Isaacson, Walter. Leonardo Da Vinci (Simon & Schuster 2017). Leonardo even experiments with the placement of the horses. For instance, the horses on the right are actually different potential positioning of one horse:

Leonardo, as was typical, failed to finish this commission; this time, he failed to finish because the Duke of Milan accepted Leonardo’s what essentially plea for employment. Filippino Lippi was asked to replace the unfinished work. Lippi paid homage to Leonardo’s original design: