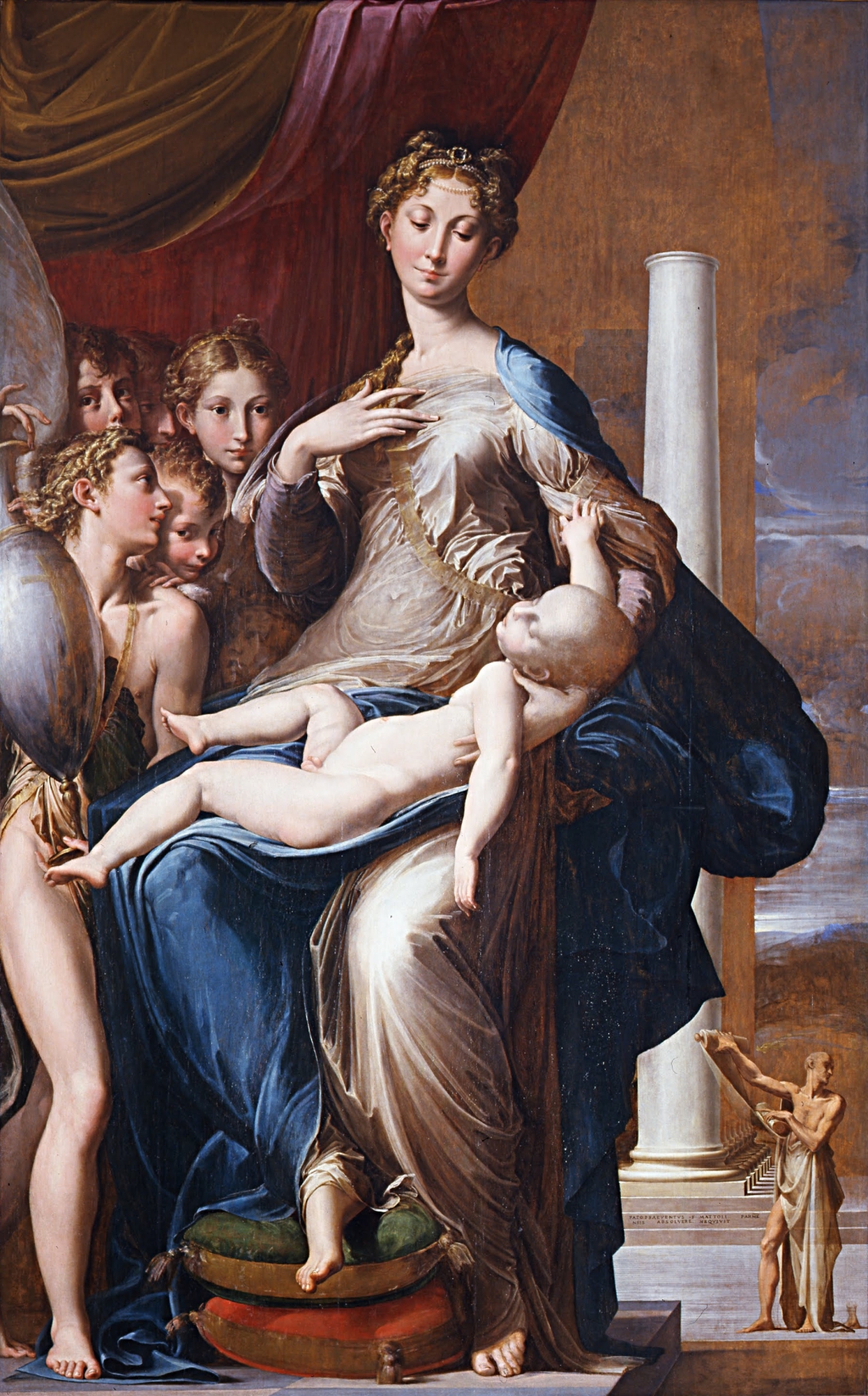 As I noted in my previous post, the Uffizi opened 14 new rooms following its reopening after its COVID shut down. That post discussed the rooms known as D1 through D6. This post explores the next two rooms, D7 and D8.

D7 – Corridor of the Marbles

A unique room in the new space is called the Corridor of the Marbles. Instead of paintings, viewers are confronted with Roman reliefs dating from the 1st century AD. Most, if not all, of the reliefs are copies of earlier Greek works. For instance, the first relief in the hall is likely one of the dozens of replicas of a Greek relief that was produced in the late classical period (400-300 BC).

Scholars have pieced together copies of what they believe to be the original Greek relief, and, based upon this Frankensteinian creation, they have determined that the hand on the left on this replica belongs to the Greek goddess Selene, the Greek personification of the moon. (Her Roman counterpart was known as Luna). Selene would drive her moon chariot, typically led by two horses or two bulls, across the sky, giving light to the mortals during the night.

The next relief is known as the “Nike Balustrade.” Here, two women led an ox to sacrifice while the women in front is holding a thymiaterion, i.e. an incense burner, likely part of the sacrificial ritual.

This Roman relief is a copy of a frieze, depicted below, that once decorated the Nike-Athena Temple in the Pantheon in Athens.

The next relief depicts dancing maenads (female followers of the Greek god Dionysus) and, like the others, is a Roman copy of a late 5th century BC Greek original.

There were more than 60 copies of the original work made, including the one pictured to the left of the Uffizi version, currently at the Louvre. Copies were typically commissioned or bought by wealthy Romans eager to demonstrate to their house guests that they were cultured and educated (and wealthy) enough to have Greek art in their homes. Obviously there were only so many of the Greek originals to go around so a booming industry developed that created copies for those who weren’t lucky enough to get ahold of an original. Thus, why we have so many Roman replicas today.

The women in the center holds Dionysus’ Thyrsus, a staff of giant fennel covered in ivy toped with a pine cone. It symbolized prosperity, fertility, and hedonism (all attributes of the god Dionysus). The first two women in the scene are carrying hunks of animals that have been physically torn apart, references to the The Bacchae, a tragedy written by the Greek playwright Euripides. In The Bacchae, the god Dionysus punishes the people of Thebes for failing to believe that he is the son of Zeus by putting the city’s women into a frenzied trance during which they perform atrocities. The Bacchae is considered by some scholars to be not only Euripides’ greatest tragedy, but the greatest tragedy ever written.

Francesco Mazzola, known as Parmigianino (“the little one from Parma”), trained in close contact with Correggio, and so their work is exhibited together in Room D8. Parmigianino tended to give primacy to art, not nature, and is therefore hailed as the leader of Emilian Mannerism. (Emilia is a region of northern Italy, roughly encompassing Ferrera, Ravenna, Bologna, and Parma). The departure from naturalism is demonstrated in his works held here at the Uffizi, including his Madonna di San Zaccaria (1531-1533), which prefigures his more famous Madonna of the Long Neck, which is also discussed below.

Parmigianino depicts John the Baptist holding the baby Jesus while John’s father, St. Zachariah, stares into the distance, perhaps contemplating the tragic – but necessary – fate of both young boys. (For those unfamiliar with Christian belief, John the Baptist was said to have been beheaded on the orders of Herod Antipas, the Roman Tetrarch of Galilee). Mary Magdalene is pictured behind the boys, identifiable via her traditional attribute of a jar of ointment. In the background stands a ruined triumphal arch and column, demonstrating the fall of the paganism that gave rise to such structures. The column also could point to the Virgin’s incorruptibility, as it likely does in Parmigianino’s later work, the Madonna of the Long Neck (c. 1534-1539).

Madonna of the Long Neck was commissioned by Elena Baiardi Tagliaferri for her private chapel in the convent church of Santa Maria dei Servi in Parma. Unfortunately, the work remains unfinished because Parmigianino died during its composition, as is evidenced by a foot without a body in the lower right corner as well as an unfinished angel’s head underneath Mary’s arm. Scholars believe that this figure was supposed to be a fellow saint (likely St. Francis) standing next to St. Jerome, who holds a scroll. The work was actually found in the artist’s studio after his death at the age of 37 in 1540. Due to its unfinished status, an inscription was added to the bottom step of the column, declaring “Adverse destiny prevented Francesco Mazzola from Parma from completing this work.” The name of the work clearly reflects Mary’s elongated neck, which mimics the ivory-colored column (likely prefiguring Christ’s death) behind her. It may also be an illusion to the Marian hymn Collum tuum ut columna (“Your neck is like a column”), which celebrated Mary’s incorruptibility. The Christ-child’s reflection in the urn on the right of the painting loosely resembles a cross, which also prefigures Christ’s death. In fact, to underscore this reference, Parmigianino painted Christ’s left arm to look as though it was dislocated, a clear reference to Michelangelo’s Pieta (located in St. Peter’s):

The other artist showcased in this room is Antonio Allegri, known as Correggio, after the city in which he was born. Along with Parmigianino, Correggio was at the forefront of the revival of Emilian painting and is known for his small devotional pictures, such as his Adoration of the Christ Child (1518 – 1520), located in this room.

The subject of Mary’s adoration of her child had been popular in the 15th century with artists such as Filippo and Filippino Lippi, where the iconography had been cemented, but its popularity had lost some of its steam as artists explored subjects outside the realm of religion. Thus, Correggio looked to the older examples of Adorations for the visual references that should be included when depicting such a subject.

The iconography was inspired by St. Bridget of Sweden, a mystic who had religious visions, including one of baby Jesus’ birth:

[S]he gave birth to a Son, from whom there went out such great and ineffable light and splendor that the sun could not be compared to it. …

But yet, at once, I saw that glorious infant lying on the earth, naked and glowing in the greatest of neatness. His flesh was most clean of all filth and uncleanness. … And the Virgin’s womb, which before the birth had been very swollen, at once retracted; and her body then looked wonderfully beautiful and delicate.

When therefore the Virgin felt that she had now given birth, at once, having bowed her head and joined her hands, with great dignity and reverence she adored the boy and said to him: ”Welcome, my God, my Lord, and my Son!” And then the boy, crying and, as it were, trembling from the cold and the hardness of the pavement where he lay, rolled a little and extended his limbs, seeking to find refreshment and his Mother’s favor.

Cosimo II placed exhibited Correggio’s work in the Tribuna, where it stayed for quite some time. Indeed, it is prominently featured in Johan Zoffany’s Tribuna of the Uffizi, painted 1772–1778.

Correggio’s other work in this room, Rest on the Flight into Egypt (c. 1520), depicts the Holy family on their sojourn to Egypt to escape King Herod’s so-called Massacre of the Innocents, as told in the Gospel of Matthew, Chapter 2:

The actual scene itself, however, is based on the apocryphal gospel of pseudo-Matthew, which is part of the New Testament apocrypha, a group of writings by early Christians that were once cited as scripture. Since the early 5th century, however, the Catholic Church has limited what it believes to be the divinely inspired works to the current 27 books of the New Testament. The apocryphal gospel of pseudo-Matthew narrates a story wherein Mary is resting under a date tree and asks her husband, St. Joseph, to pick some fruit. The fruit was too high for Joseph to reach, however, so he told Mary that they should look for water instead. Jesus then asked the branch to bend down, which it did, and a spring appeared at the tree’s roots. Correggio depicts the moment that Joseph offers Jesus some fruit from the bowed branch.

The Altarpiece was commissioned for the family chapel of the Immaculate Conception in the Church of St. Francis in Correggio, the artist’s hometown and namesake, by jurist Francesco Munari, which perhaps explains the anachronistically inclusion of St. Francis (identifiable via his monk habit) kneeling on right. (The church for which it was destined was also a Franciscan church).

The palm tree marks central axis of work, and in fact the work was once known as Madonna of the Palm Tree, denoting the tree’s importance. The palm is a symbol of Mary’s perennial life, virginity, maternity because it never dries up, grows only in pure water, and provides shelter. She is likened to a palm in the Song of Songs (7, 8): “your stature is like that of a palm tree, and your breasts like its clusters of fruit.” Yet, the Palm is also a foretelling of Jesus’ sacrifice and victory over death. In fact, in Greco-Roman culture, from which the Catholic church borrowed heavily, the palm was associated with the Goddess Nike (depicted here holding a palm), the goddess of victory and triumph. In Egypt, moreover, the country in which this work is set, the palm was used in funeral processions to represent eternal life.